December 30, 2021 is a day that very few in the county will forget. At around 1030 that morning, BES first responded to a wildland fire north of Boulder, alongside seven other agencies. As BES wildland firefighters were working to protect nearby homes from the threat of the advancing fire, tone alerts and initial reports from the Marshall Fire started coming in.

Due to the rapid growth of the Marshall Fire, all available BES units were soon re-deployed and responded to this major incident in various capacities, joining forces with other fire departments and agencies on scene. BES members notably helped with initial incident staging management for resources that were incoming from the county and the state. They assisted with the evacuation of residents from affected neighborhoods, the rescue of large animals such as horses, and the protection of homes until early the next morning.

The Marshall Fire unfortunately also took a personal turn for the team as two of our volunteers and firefighters lost their home that day. 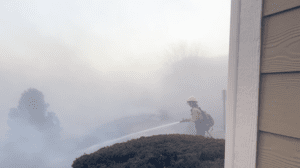